You had me at caffeine

The coffee bean has deep global roots going back centuries.

Some stories claim a goatherd in Ethiopia discovered coffee after his goats got excited after eating the beans. Some claim Arabic discovery through along the silk road.

The lineage of tea goes back even further. Currently, there are approximately 1600 tea varieties and the list is growing. In contrast, there are only four varieties of coffee bean -Arabica, Robusta, and less common Liberica and Excelsa.

Some countries are steeped in tradition, custom and ceremony of tea. Other countries worship at the base of Arabica mountain and wouldn’t hear of starting a conversation let alone the day without coffee. It has become synonymous with a morning ritual. Caffeine is your all-nighter accomplice, your study buddy, your two best friends catching up sidekick. We know it, we love it. And yet……

Coffee consumption has been linked with an array of health challenges. Specifically heart palpitations, panic attacks, sleep disruption, nervous exhaustion, and gastrointestinal upset. There is also speculation regarding the psychological and physiological addictive nature of caffeine. But is it really all that bad for everyone? And why?

Have you ever wondered why someone can drink a cafe late on an empty stomach then have another one at 10 pm and it not bother them one bit? Meanwhile, you sip your tea at 8 am and still wide awake at 11 pm? It has a lot to do with a persons constitution and adrenal health.

Healthy adrenal function should show signs of sleep disruption if drinking caffeine late at night. The bodies natural melatonin cycle begins at dark and ingesting caffeine after dark messes with that cycle. Those who can consume a triple shot after dinner and go right to sleep should have a think about how they can support their adrenal glands to produce adequate adrenaline and noradrenaline throughout the day and to recognize natural circadian (sleep and wake cycles).

Coffee especially contains an abundance of B vitamins and both tea and coffee contain two major ingredients: caffeine and tannins. Gastrointestinal upset is a common side effect of drinking tea and coffee. Coffee and tea both contain tannins – a polyphenol that has antioxidant (free radical scavenging) properties and is astringent in nature, giving that bitter flavor. Tannins are also responsible for blocking some nutrients from being absorbed thoroughly in the gut, such as iron. People with iron deficiency should not drink tea or coffee on a regular basis. Caffeine increases the metabolic rate and thus instigate peristalsis – which is why you need to go to the toilet pretty soon after your morning cup!

Caffeine has been shown to increase the metabolic rate to the point of assisting weight loss, particularly in green tea. However, science points out that it’s other ingredients in green tea and enhanced extracts of green tea such as catechin and EGCG (Epigallocatechin gallate) so drinking one-three cups of green tea per day probably won’t be effective in weight loss on its own.

However, the antioxidant-rich green tea at three cups a day is significant for brain, eye, skin, brain, heart and liver function! The biological health benefits of green tea have been known for some time now. Green tea and a low refined carbohydrate diet have been heralded as the reason for long life expectancy and low chronic disease rates in Japan.

And then there are ‘other’ caffeinated drinks like Monster and Red Bull. They are incredibly popular with young people due to the taste, massive rush from high caffeine content and copious amounts of sugar. Because of the intense high and sugar rush, these drinks can become extremely addictive, to avoid the crash that inevitably follows, people drink more to keep them at that same high. There is nothing clean or useable in these drinks. They are flogging to the adrenals, a belt to the pancreas and a truckload of artificial ingredients for the liver to contend with and try and metabolize. Plain and simple, they are HORRIBLE for you and should be avoided completely.

The liver also has a role to play with how the gastrointestinal system responds to coffee especially. Caffeine is metabolized through the liver, with derivates staying in the kidneys for 48 hours before finally being removed from the body via urine. That’s a long time. Say you have a liver that has a lot to contend with on a day-to-day basis, considering caffeine stays within the system for 48 hours, ingesting caffeine every day, how would that start congesting the organ? Based on the average western diet, let’s take a look at a snapshot of what the liver has to deal with in a day:

Symptoms associated with a liver response would be gastric upset, nausea after ingestion, pale and or runny stools (poop), gas and bloating and dark circles under the eyes. If you are experiencing those symptoms, stop drinking caffeine for a while, or, reduce caffeine – from every day to every third day. Increase water consumption substantially (assists liver detoxification) and eat more green leafy vegetables for example. But don’t despair! There are many coffee alternatives.

Decaf is specific for people who become agitated or who have sleep disturbance from drinking caffeine. For those who have gastric upset from drinking caffeine, drinking decaf doesn’t always fix the problem. Remember, it’s not just the caffeine but also the astringent nature of tannins that can cause gastric upset. People living with food sensitivities will be more prone to gastrointestinal symptoms of tea and coffee and should switch to herbal teas or coffee alternatives.

As a warm drink alternative, mushrooms have come into this market in a big way! Medicinal mushrooms (not the psychedelic kind) such as Chaga, Tremella, Reishi, Turkey tail and Lion’s mane have all shown to make an excellent brew with added health properties. Chaga lattes are easy to make, and deliver a similar bitter earthy flavor that coffee has, but within the jitters and digestive upset. Chaga contains zero caffeine and is actually a digestive adaptogen – meaning it helps the body cope with stress as appose to coffee which irritates and inflames the digestive system. Mushrooms are also potent antioxidants, so improve free radical scavenging of toxins in the body. A simple recipe for Chaga latte below:
1 teaspoon of Chaga powder mixed in 2 TBS of hot water
1 cup plant milk – warmed and mixed in a milk frother
1 TBS of agave nectar or coconut sugar (optional)
A sprinkling of cinnamon (optional)

Another hot drink caffeine-free option is Golden milk, which is a moderately spiced latte made with turmeric, ginger and cardamom. I particularly like this recipe which is closer to the origins of the recipe than modern spins. Its roots are within Ayurvedic practice (traditional Indian medicine).

Herbal tea have therapeutic properties (see blog post Herbal Tea for Health ). Tea and coffee have a warm ceremonial and communal place in our lives, it’s the nectar for congregations, it’s the warm body hug in the morning, and the welcome home at the end of the day. As discussed, tea and coffee contain vitamins and health benefits that promote free radical scavenging and increases metabolism. SO what I’m saying is…  caffeine is not all bad! However, the health benefits can be overwhelmed when overconsumption outbalances the benefits. 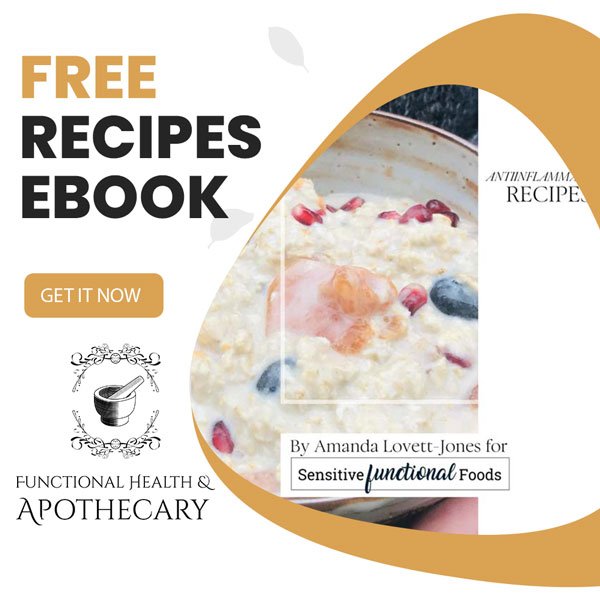 Join our community and get your FREE Anti-Inflammatory Recipes eBook!